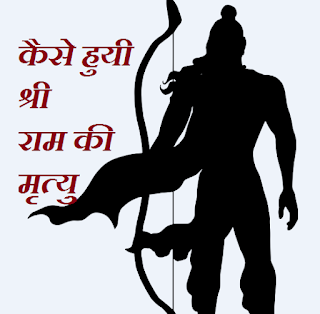 We all know these things and this is shown on TV also in Ramayana.

But even today there are different facts, stories behind how Lord Shri Ram died, which are as follows,

The most popular story about the death of Lord Shri Ram is that Mother Sita fell into the earth after sleeping Luv and Kush to Shri Ram, after this Shri Ram was very sad and called the God of tomorrow, Yamraj and After taking the consent of his death, he himself got absorbed in the river Saryu,

The second story related to the death of Lord Shri Ram is that, Lord Shri Ram spent more than 1000 years on earth, ruled, after that when all the tasks of his incarnation were completed, he disguised as a sage. Appeared and invoked Yamraj, and expressed his desire to talk to him, in such a situation Yamraj also came in the form of a sage and put a small condition before talking that no one else should see us while talking, so Shri Ram made Lakshman stand at the door and said that no person should come inside and if this happens then there will be death penalty for Lakshmana.

Lord Shri Ram and Kaal i.e. Yamraj were talking, only then Sage Durvasha came there and requested to meet Ram, on this Lakshman refused him, on this Sage Durvasha got angry and was about to curse, then Lakshmana Apologized and after that they entered the place where Shri Ram and Yamraj were talking, seeing this Shri Ram got angry and seeing Lakshmana not being punished, he left the country, for Lakshman it was also like death. That's why he got absorbed in the Sarayu river and took the form of Sheshnag, and went to Vaikuntha.

After this Lord Shri Ram also did brother

After death, Sarayu joined the river, assumed the form of Vishnu and went to Vaikuntha.

So friends, this was some interesting information related to the death of Lord Shri Ram, which is very popular, hope that you would have liked this post, if you liked this information, then please share it,

how did it happen Mr.

on March 11, 2022
Email ThisBlogThis!Share to TwitterShare to FacebookShare to Pinterest