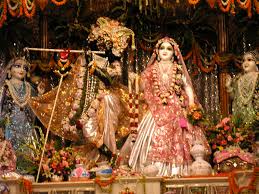 Some of us do not even know that Krishna was not married to Radha, but still the story of her love is prevalent everywhere,
The love of Lord Krishna and Radha was called Jivatma, the divine is called Milan, Radha and Shri Krishna used to love each other since childhood, when Shri Krishna was eight years old, both of them felt the love,
Radha was acquainted with the divine qualities of Shri Krishna, he kept memories of memories (memories) throughout his life, this is the greatest beauty of his relationship, 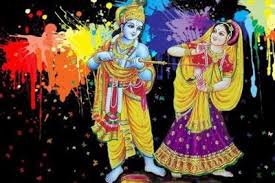 It is said that Shri Krishna was the most beloved of both things, and these two things were related to each other in one another and those two things were Basuri and Radha,
It was the tune of Krishna's Basuri that attracted Radha to Krishna and pulled towards him, because of Radha, Shri Krishna always kept Basuri with him, even if Sri Krishna and Radha could not meet but His Basuri always tied them both in a formula,
Basuri is definitely in any way that Shri Krishna gets his depiction because Basuri is a symbol of Lord Krishna's love for Radha, though there are many different details and stories associated with Radha, but a popular story is that Lord Krishna Radha first became different when Shri Krishna's mother Kansh invited her to Balram and Krishna, the people of Vrindavan were shocked to hear this news,
Before going to Mathura, Shri Krishna met Radha, knew every activity going on in the mind of Radha, after telling her goodbye to Radha, Krishna went away to Mathura and went away from Radha to promise that she would come back,
But Krishna did not come back. His marriage also took place with Rakmani, Rakmani too had saved much to get Mr. Krishna. To get Mr. Krishna, he went against his brother Rukmi, like Radha, he also loved Lord Krishna. And Rakmani wrote a letter telling Shri Krishna about his love, in which Rukmini wrote that he came and took him with him, after which he came to Shri Krishna Rukmani These and married him, 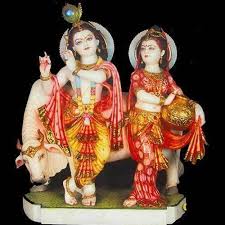 When Krishna's Vrindavan was abandoned, the description of Radha was greatly reduced when Radha and Krishna met for the last time, Radha had said to Shri Krishna that even though she is going away from them, but Krishna will remain with her forever, after that Krishna Mathura went and completed his work to kill the Kshash and the other demons, and after this, Krishna went to Dwarka to protect the people and became known as Dwarkadhishak and became popular,
When Krishna walked away from Vrindavan, Radha's life had taken a different turn. Radha's marriage took place with a king, Radha played the whole ritual of her married life and became old, but her mind was still dedicated to Krishna. Radha performed his entire duty on the wife's behalf, on the other hand, Shri Krishna performed his Goddess Duties,
After performing all the duty, Radha went to meet her beloved Shri Krishna, then she heard about Krishna's wedding with Rukmini and Satyabhama but she is not sad, 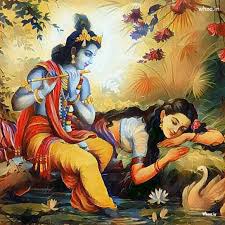 When Krishna saw Radha, he was very happy and kept talking to each other for a long time, nobody knew Radha in the city of Daharka in Kanha, at the request of Radha, Shri Krishna appointed him as a Devika in the palace Radha lived in the palace all day and used to see the work associated with the palace and Radha used to visit Sri Krishna only when she got an opportunity, but inside the palace like Radha Krishna before Lord Krishna Being unable to realize the spiritual connection, Radha decided to go away from the palace. He thought that he would go away and establish a deeply spiritual relationship with Shri Krishna as before, he did not even know that he was being said But Lord Krishna knew, slowly the time had passed and Radha became utterly lonely and weak and they needed Lord Krishna in that time and after all this time Lord Krishna Krishna came in front of him, Krishna told Radha that he asked for something but Radha refused, but when Krishna said again, Radha said that she wants to see him playing Baisuri for the last time, Shri Krishna took his basuri and Very tuneful sounds started playing in the tune, Shri Krishna rang the basuri every day and rang till then Radha did not merge in the spiritual way in Shri Krishna,

Radha gave up his life listening to Basuri, Lord Krishna knew that his love is immortal, yet he could not be able to overcome Radha's death and became unhappy, Krishna broke the basuri as a symbolic ending of love and started bushing , And after the death of Radha, Shri Krishna never again played basuri,
It is said that when Lord Vishnu was born as Lord Krishna in the Dwapar era, then Mother Lakshmi had also taken birth on earth as Radha so that she would remain with her on the earth,
So friends were these prevailing story about Radha Gandhi's death and about breaking of the flute of Shri Krishna,
You must definitely tell us these stories, as well as follow the blog for a lot of good information and stories,
Thanks .......
on May 13, 2019
Email ThisBlogThis!Share to TwitterShare to FacebookShare to Pinterest