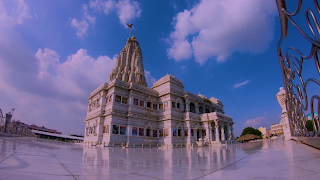 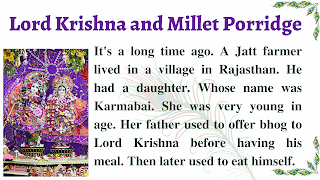 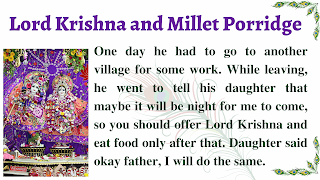 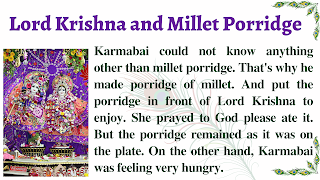 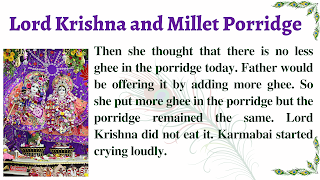 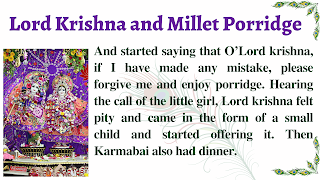 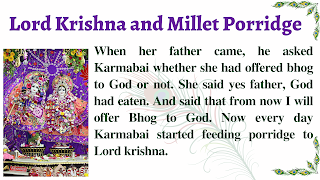 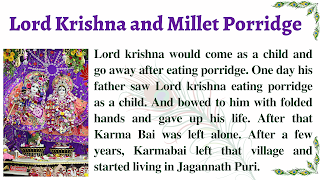 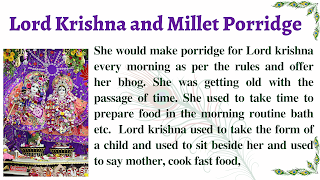 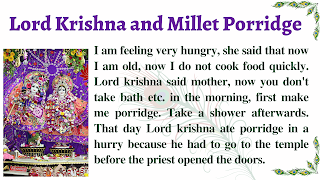 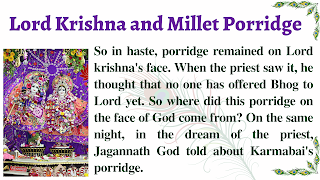 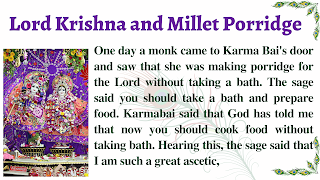 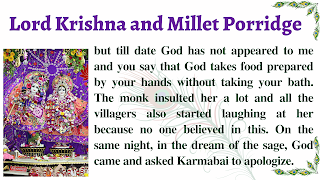 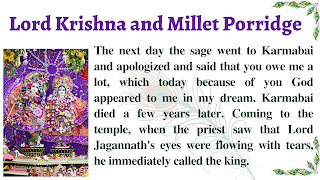 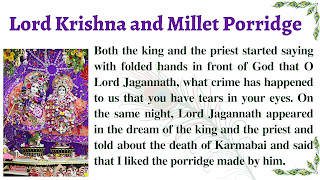 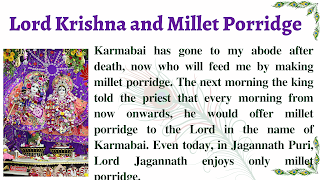 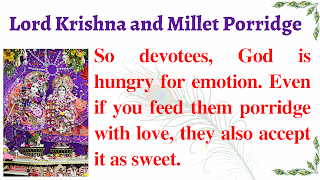 It's a long time ago. A Jatt farmer lived in a village in Rajasthan. He had a daughter. Whose name was Karmabai. She was very young in age. Her father used to offer bhog to Lord Krishna before having his meal. Then later used to eat himself. One day he had to go to another village for some work. While leaving, he went to tell his daughter that maybe it will be night for me to come, so you should offer Lord Krishna and eat food only after that. Daughter said okay father, I will do the same. Karmabai could not know anything other than millet porridge. That's why he made porridge of millet. And put the porridge in front of Lord Krishna to enjoy. She prayed to God please ate it. But the porridge remained as it was on the plate. On the other hand, Karmabai was feeling very hungry. Then she thought that there is no less ghee in the porridge today. Father would be offering it by adding more ghee. So she put more ghee in the porridge but the porridge remained the same. Lord Krishna did not eat it. Karmabai started crying loudly. And started saying that O’Lord krishna, if I have made any mistake, please forgive me and enjoy porridge. Hearing the call of the little girl, Lord krishna felt pity and came in the form of a small child and started offering it. Then Karmabai also had dinner. When her father came, he asked Karmabai whether she had offered bhog to God or not. She said yes father, God had eaten. And said that from now I will offer Bhog to God. Now every day Karmabai started feeding porridge to Lord krishna. Lord krishna would come as a child and go away after eating porridge. One day his father saw Lord krishna eating porridge as a child. And bowed to him with folded hands and gave up his life. After that Karma Bai was left alone. After a few years, Karmabai left that village and started living in Jagannath Puri. She would make porridge for Lord krishna every morning as per the rules and offer her bhog. She was getting old with the passage of time. She used to take time to prepare food in the morning routine bath etc. Lord krishna used to take the form of a child and used to sit beside her and used to say Lordess , cook food fast, I am feeling very hungry, she said that now I am old, now I do not cook food quickly. Lord krishna said Lordess , now you don't take bath etc. in the morning, first make me porridge. Take a shower afterwards. That day Lord krishna ate porridge in a hurry because he had to go to the temple before the priest opened the doors. So in haste, porridge remained on Lord krishna's face. When the priest saw it, he thought that no one has offered Bhog to Lord yet. So where did this porridge on the face of God come from? On the same night, in the dream of the priest, Jagannath God told about Karmabai's porridge. One day a monk came to Karma Bai's door and saw that she was making porridge for the Lord without taking a bath. The sage said you should take a bath and prepare food. Karmabai said that God has told me that now you should cook food without taking bath. Hearing this, the sage said that I am such a great ascetic, but till date God has not appeared to me and you say that God takes food prepared by your hands without taking your bath. The monk insulted her a lot and all the villagers also started laughing at her because no one believed in this. On the same night, in the dream of the sage, God came and asked Karmabai to apologize. The next day the sage went to Karmabai and apologized and said that you owe me a lot, which today because of you God appeared to me in my dream.

So devotees, God is hungry for emotion. Even if you feed them porridge with love, they also accept it as sweet.