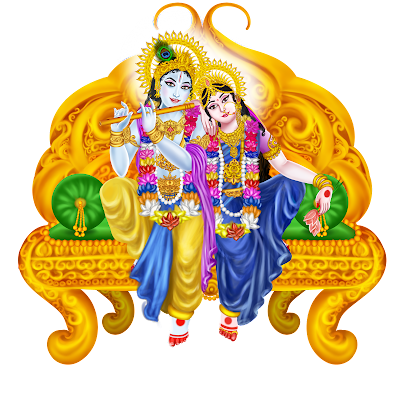 Where does it go that some places where Lord Shri Krishna still visits every day, such as Nidhi Van, a temple in Mathura where paan, datun, laddu, water bottle, and bed are planted in the evening, and after this the temple The door of the temple is closed but when the door of the temple is opened in the morning, the teeth are chewed, the paan is eaten, the laddus are half available, and the bed also looks as if someone has slept on it,

To find out about this, many times big news channels and many types of people who do not believe in God kept these things in front of them in the temple, after that they checked the temple in front of them, got the lock in front of them and the temple overnight. But he could not deny the truth that someone comes here, where does he come from, how he comes, when he comes and when he goes, till date no one has been able to tell,

Similarly, there is the secret of Nidhi forest where no one is allowed to go inside its forest after dusk, where does it go, even if by mistake, Raat remains inside it, then in the morning either he becomes mad and He dies in a short time, or in the morning that man is dead,

Leave man, animals like monkeys, and birds who live in this forest all day, as soon as evening they all leave this forest and go away, and there are many other such things, such are the miracles that no one could do. ,

Now let's talk about 16000 queens of Shri Krishna, first of all, let us tell you that many people do not even know that Shri Krishna was not married to Radha, why it was not done, what was the reason behind it. I will talk about it in another post sometime,

There is a huge role of a demon behind the 16000 queens of Shri Krishna, whose name was Narakasura, Narakasura was such a demon who used to torture men as well as women and girls, and after winning any king, all the young girls there. and used to take women captive,

Her tyranny, behavior was such with those women and girls that even after being freed, they did not want to go back to their country because of their shame and shame, because they were seen with evil eyes in the society,

Once Narakasura invaded even heaven, then upset by his powers, the gods sought help from Lord Shri Krishna, after this Shri Krishna fought a fierce battle with Narakasura and killed Narakasura,

But at this time, 16000 girls were taken captive at Narakasura's place, who did not want to go to their country even after being freed, God, seeing this problem, married all these 16000 girls, and made them his queen,

After this, in the morning, all those different forms of God became one and used to fulfill the duty of being their king.

So friends, this was the secret of 16000 queens of Shri Krishna, hope you would have liked the information, if you liked the post, then share it, and all say Radhe Radhe.....

on March 09, 2022
Email ThisBlogThis!Share to TwitterShare to FacebookShare to Pinterest