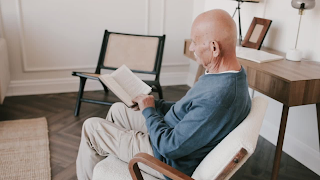 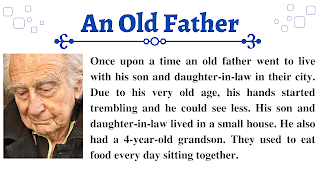 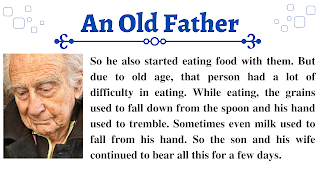 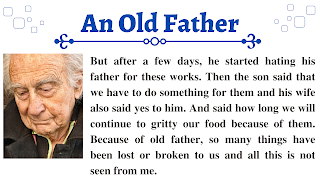 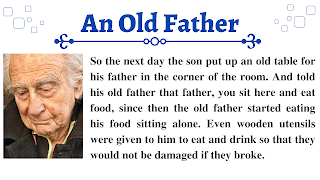 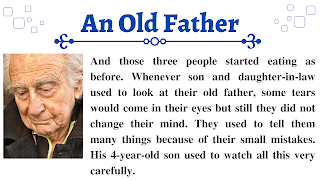 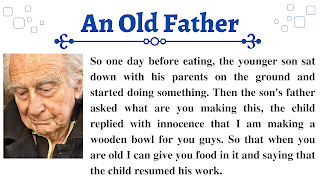 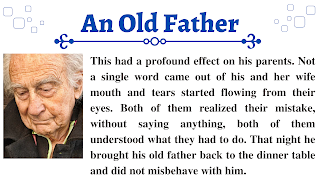 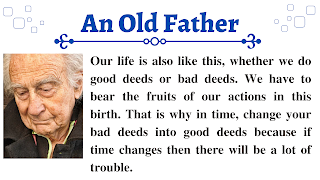 Once upon a time an old father went to live with his son and daughter-in-law in their city. Due to his very old age, his hands started trembling and he could see less. His son and daughter-in-law lived in a small house. He also had a 4-year-old grandson. They used to eat food every day sitting together. So he also started eating food with them. But due to old age, that person had a lot of difficulty in eating. While eating, the grains used to fall down from the spoon and his hand used to tremble. Sometimes even milk used to fall from his hand. So the son and his wife continued to bear all this for a few days. But after a few days, he started hating his father for these works. Then the son said that we have to do something for them and his wife also said yes to him. And said how long we will continue to gritty our food because of them. Because of old father, so many things have been lost or broken to us and all this is not seen from me. So the next day the son put up an old table for his father in the corner of the room. And told his old father that father, you sit here and eat food, since then the old father started eating his food sitting alone. Even wooden utensils were given to him to eat and drink so that they would not be damaged if they broke. And those three people started eating as before. Whenever son and daughter-in-law used to look at their old father, some tears would come in their eyes but still they did not change their mind. They used to tell them many things because of their small mistakes. His 4-year-old son used to watch all this very carefully. So one day before eating, the younger son sat down with his parents on the ground and started doing something. Then the son's father asked what are you making this, the child replied with innocence that I am making a wooden bowl for you guys. So that when you are old I can give you food in it and saying that the child resumed his work. This had a profound effect on his parents. Not a single word came out of his and her wife mouth and tears started flowing from their eyes. Both of them realized their mistake, without saying anything, both of them understood what they had to do. That night he brought his old father back to the dinner table and did not misbehave with him.

Our life is also like this, whether we do good deeds or bad deeds. We have to bear the fruits of our actions in this birth. That is why in time, change your bad deeds into good deeds because if time changes then there will be a lot of trouble.